Noma, derived from the Greek word "nomein" literally means "grazing, eating away" which by analogy can be translated as " tumor, which eats around itself". In the German language noma was named "cheeks fire", and in Britain after WW1 "trench mouth". In the German expression there are already two characteristics of the disease included: firstly, the location, namely the cheek, and on the other hand the inflammation.

The Latin name "Cancrum Oris" particularly targets the destructive nature of the disease. Which is not entirely accurate, because with cancer the tissue proliferates, as opposed to noma: the tissue dies off due to the infection.

Causes and frequency of noma

Noma is a bacterial infection that doesn’t occur in healthy children. Earlier, before a variety of medications, particularly antibiotics, were discovered, noma only occurred in children who experienced serious infectious diseases such as scarlet fever, measles, typhoid fever and were under nourished. Today noma is still a widespread disease among under- and malnourished children living in poor hygienic conditions in underdeveloped countries.

Noma is epidemic in many African countries. Every year about 100,000 children fall ill from noma. The mortality rate is 80%. The general public is generally not aware of noma. This is also partly because it is still demonized. Therefore, affected children are often hidden from strangers or even from their own villagers.

Progression of the disease

Noma begins with the infection of the gums or the mucosa, on the inside of the cheek. From there, the infection will spread rapidly within a few days, affecting deeper tissues such as muscles and even bones. The infection may spread across the entire face in only five to six weeks. Accordingly, important functions such as breathing, chewing, swallowing, speaking, smelling and seeing will be permanently impaired. 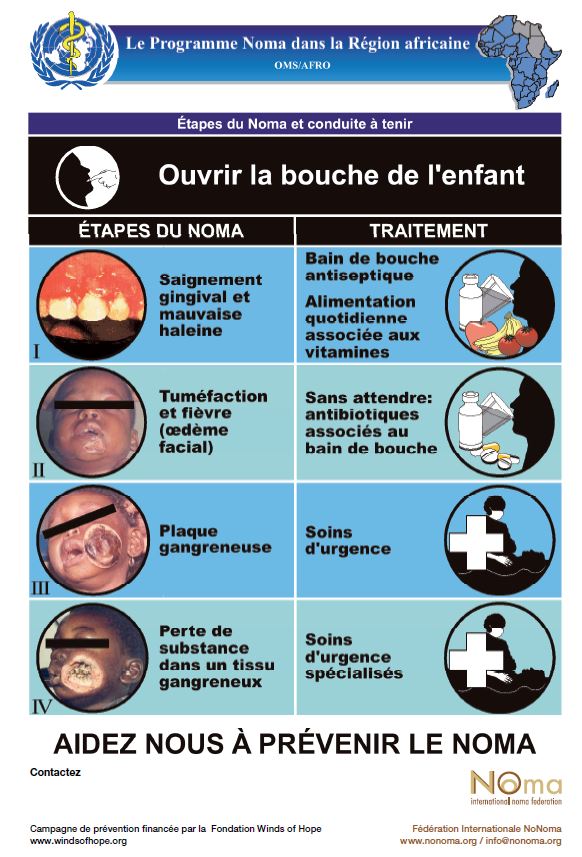 The young patients do not only suffer from great pain and loss of essential functions, but also from the death of the tissue, which deforms their face and complicates the social interaction additionally.

The most promising way to prevent noma is to improve the nutritional state of children and to prevent or treat other diseases such as malaria, measles, rubella, typhoid, etc.

If noma occurs, the child must be stabilized immediately with a customized emergency nutritional program and an antibiotic drug therapy in order to build up the immune system. Afterwards, further treatment, such as plastic surgery and physical therapy is necessary. This, however, exceeds by far the possibilities of developing countries.

Complications arise from the destructive nature of the disease. In principle, all structures of the face can be affected: mouth, tongue, nose, eyes and ears. Ultimately a jaw lock or a lack of jaw muscles leads to the fact that chewing and swallowing is no longer possible. As a result, the child dies of thirst, hunger, vomit, or of the infection itself. Without help complications are inevitable - the disease usually ends fatally: the mortality rate without medical care is unacceptably high at 80%. If a noma victim receives professional help in time, the survival rate is close to 100%.

The disease can be avoided in developing countries through structured measures and by improvements of the socio-economic conditions. This includes in particular the prevention of malnutrition! The improvement of sanitary conditions and the prevention or treatment of diseases such as measles, rubella, etc., and of other infections caused by parasites (e.g. malaria), viruses or fungi would also help to prevent noma

The infection must be stopped as quickly as possible through medication and the child has to be strengthened with a healthy, balanced diet. Very few noma children have the fortune to receive help for free from European surgeons in order to restore the masticatory and speech functions, respectively its own face.